link to the original article

The rest of the country just couldn’t look away. Our appetite for the iconography of disaster proved bottomless. New Orleans artist Susan Gisleson called it “emotional pornography.” If President Bush failed his moral duty by not looking at the disaster closely enough, the rest of us were going to make up for it by fixating on the devastation with a terminally morbid fascination. Three exhibitions in Atlanta this summer wade directly into this fraught territory: Eric Waters’ Solemn Sounds of Silence: A Photographic Project of Reverence and Remembrance at Mason Murer; Katrina: Five Years of Reflection at Spruill Gallery; and Jennifer Shaw’s Hurricane Story at Jennifer Schwartz Gallery.

Waters has been documenting New Orleans’ jazz and street cultures for nearly 30 years. He lost his home and most of his life’s work in the storm and has since relocated to Atlanta.
In 2008 he began photographing the clarinet collection of jazz musician Dr. Michael White. Solemn Sounds is the outcome of that documentation process, comprising 30 modestly sized photographs in searing, saturated color. The photos depict White’s clarinets in various arrangements, their surfaces enriched by the patinas and verdigris that come from long-term exposure to water. In many of the images, flowers — sometimes turgid with life, other times near death — have been arranged around the clarinets in poetic embraces.

The photos are unquestionably beautiful. But they pull their punches emotionally. The rhetorical gesture of the flowers and the sweetness of the blue and green hues distract from the artist’s argument rather than augment it. By profoundly prettifying his subjects, Waters has made confections that slide down too easily. Disaster is made gorgeous and loss made romantic.

Solemn Sounds marks a departure for Waters. His earlier photographs of second-line processions and Mardi Gras revelers are vital and direct. Nothing in Solemn Sounds carries off the symbolic snap of “Lady on the Coffin,” White’s 2008 black-and-white photograph of a young woman in pristine Keds dancing on a coffin as it’s borne down a crowded street.

Taking a step closer to a social documentary approach, Elyse Defoor’s “X.U.ME” will occupy Spruill’s front room as part of Five Years of Reflection. The artist is from Atlanta, but became a part-time immigrant to the Crescent City, traveling back and forth many times in the years before and after Hurricane Katrina. She refers to New Orleans as “my beloved city” in the narrative accompanying the exhibition.
“X.U.ME” stems from Defoor’s 2006 return to New Orleans, a time during which the wreckage was still being surveyed and bodies still being tallied. Reacting to the large spray-painted Xs, which search teams used to keep track of damage and lives, Defoor began to create a body of work around the figure of the X.
Defoor’s figure-X drawings and paintings range from just a few inches to more than 6 feet high. Defoor’s palette is characteristically restrained and grim; blacks, whites, and browns are punctuated by an occasional earthy red or bright orange. The surfaces are variously oily, cruddy or crinkled.

Most often employing a simple X in the middle of the composition, Defoor avoids the pornographic quality of human catastrophe. She creates no salacious pity, no maudlin nostalgia. The X calls back to New Orleans recovery efforts, but also drags in a range of cultural associations from Malcolm X to X-rated movies. The associations are rich and inch toward making catastrophe graspable.

A third response comes from New Orleans photographer Jennifer Shaw. Through hazy color photographs of dolls and other toys, Shaw tells the true story of her and her husband’s escape from Hurricane Katrina on the same night that she gave birth to her first child. The 46 photos, of which 21 are on view in Hurricane Story, comprise a narrative series for which the artist has self-published a book of the same name.

Shaw’s photographs ring with the dense color and thick atmosphere of a hallucinatory dream. But instead of creating pretty toyscapes, Shaw uses the medium and the subjects against themselves. A toy fireman battles a miniature blaze. Toy bottles of booze stack up. A toy dead body floats in a make-believe lake. Although many of the darker and more psychologically potent images unfortunately have been edited out of this show, it’s still evident that Shaw’s reaching for demons rather than channeling angels. 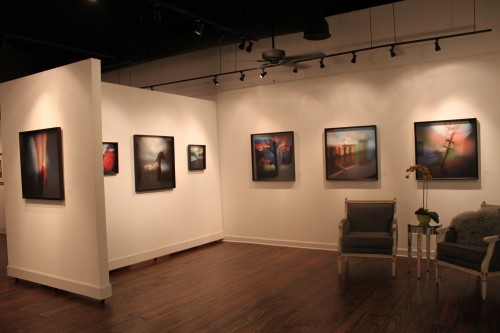