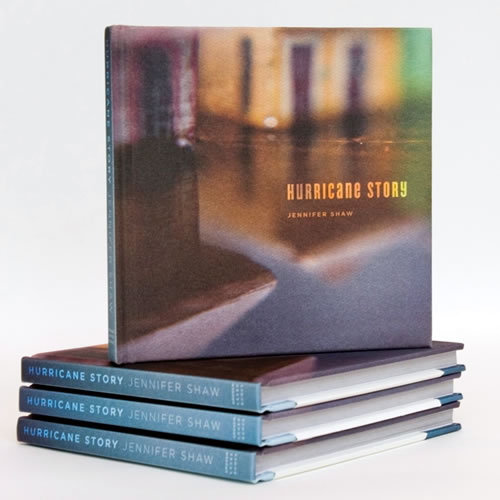 “One of the most spellbinding pieces of personal history ever captured.” — Maria Popova, Brain Pickings

“Like a mournful fairytale, Jennifer Shaw’s beautifully staged tableaux are alternately sweet and menacing, filled with emotion but never spilling over into sentimentality. The poetic marriage of words and photos makes Hurricane Story a children’s book for grown-ups.”
–Josh Neufeld, creator of A.D.: New Orleans After the Deluge

Hurricane Story is a spellbinding odyssey of exile, birth and return told in forty-six photographs and simple, understated prose. This first-person narrative told through dreamlike images of toys and dolls chronicles one couple’s evacuation from New Orleans ahead of the broken levees, the birth of their first child on the day that Katrina made landfall, and their eventual return to the city as a family. Shaw’s photographs, at turns humorous and haunting, contrast deftly with the prose.

This clothbound hardcover edition includes an introduction by Rob Walker, author of Letters From New Orleans and former “Consumed” columnist for The New York Times Magazine.

Praise for the Book