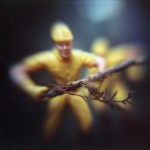 Milwaukee Journal-Sentinel: “a compelling graphic novel that feels like an art exhibit”

The Milwaukee Journal-Sentinel posted a wonderful review and interview with Jen today on their online site, JSonline: “While other survivors have written about their Katrina ordeals, no one has documented such  harrowing experiences quite the way Shaw has in “Hurricane Story” (Broken Levee Books, $18). Using toys and dolls, some altered and hand-painted, Shaw staged […]

Press Street, a New Orleans-based nonprofit literary and visual arts collective, featured Hurricane Story today on their wonderful blog dedicated to the literary life of New Orleans, “Room 220” They had some lovely things to say: “Chin Music (Press) has taken the opportunity to provide the photos, story, and experience with a proper published art […]

Amye Archer posted her review of Hurricane Story on the PANK Magazine blog today, discussing her own experiences with reacting to and understanding the stories emerging from Katrina, in addition to the book itself: “Shaw’s story is beautifully told with weighted insights and tempered observations.  She captures brilliantly the ambiguity of the weeks and months […]

aCurator Magazine: “everything about (the book) just works”

Hurricane Story is today’s feature at aCurator Magazine, a wonderful online photography magazine that was just named one of Time.com’s Top 20 Photo Blogs of 2011. “The simplicity of this book, and every image in it, is exceptionally engaging; everything about it just works. I strongly suggest you treat yourself to a copy, and at […]

Hurricane Story was featured this morning on Lenscratch, a popular photography blogzine that Wired, Source Review and InStyle have all called “one of the 10 photography blogs you should be reading.” Lenscratch curator Aline Smithson interviews Jennifer Shaw about the book, saying: “I’ve been a fan of Jennifer’s work for some time and in particular, […]

The Monroe News Star featured Hurricane Story in their June 12 article, “What remained after Katrina captured in photos” “(Shaw) recounts the fleeing to Alabama, the birth, the horrific news coming out of New Orleans and the nightmarish two months that followed accented by dreamlike photos of toys and dolls in “Hurricane Story” by Broken […]

Hurricane Story Reviewed on Lenses on the World

Derek Darke reviews Hurricane Story on the new British photo blog, Lenses on the World. “This sequence of 46 images recounts not only the story from leaving to returning but also depicts moments of despair, joy, fear, friendship and even humour. Shaw’s method focuses upon the subject while the images hazy  properties leave space for […]

Michelle Bates, editor of Plastic Cameras: Toying With Creativity (Focal Press) wrote a feature in the March/April 2011 issue of American Photo all about “plastic cameras”and their growing popularity beyond the realm of fine art photography. The first page of the spread features page eight of Hurricane Story: “At 3:47 a boy was born.” Also, […]

It’s hardly a secret that there are differences between reality and photography, yet some of those differences can still be a little surprising. Take dolls and toys. In the real world, dolls and toys ” but especially dolls ” are usually associated with the soft, fuzzy world of childhood innocence. In art photography, their history has long been darker and snarkier if not downright cynical, a tradition that harks back to at least the Dadaists and surrealists if not further.